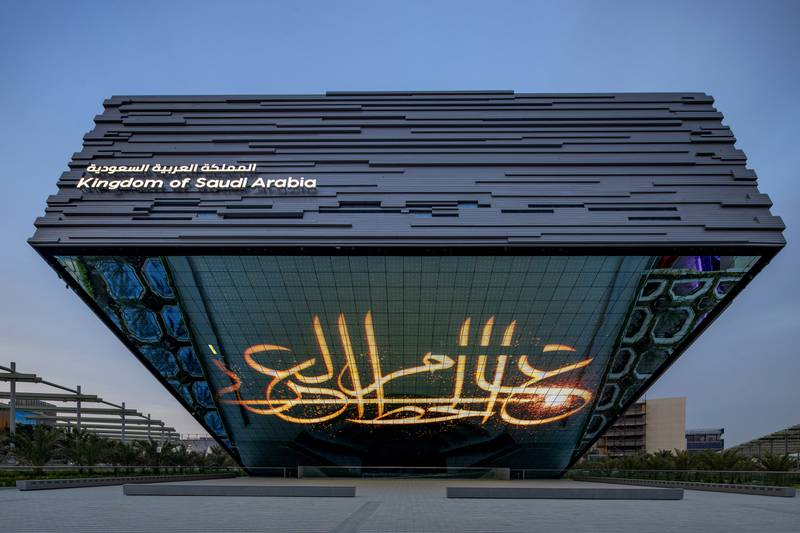 Saudi Arabia has revealed the key details of its world fair pavilion at Expo 2020.

The framework of the pavilion was completed last year. Spread over an area equal to two football pitches, the six-storey tall creation features 2,030 sparkling crystals resembling a window opening to the sky.

The gems are designed to pay tribute to Saudi Arabia’s Vision 2030 – a programme to diversify the nation’s economy from dependence on oil, increase the participation of women in the workforce, lower unemployment and increase foreign investment.

The massive 68-square-metre curved screen will take visitors on a tour through the kingdom’s natural spaces and cultural landmarks.

The journey will take in the dunes of the Empty Quarter, the flora of Al Bardani Valley in Asir region, the mountains of Tabuk and the waters of the Red Sea.

Also displayed are Saudi Arabia’s Unesco World Heritage Sites such as the At Turaif district in Ad Diriyah, the Hegra archaeological site in Al Ula, historic Jeddah, the rock art in the Hail region, and Al Ahsa oasis.

Sustainability has been placed at the centre of the pavilion’s design, and the structure has won awards for its ecological credentials, including the LEED Platinum Certificate from the US Green Building Council.

Art is also a significant part of the attraction, with an exhibition called Vision curated by Saudi artists, featuring a 30-metre floating virtual sphere and the interactive floor.

Meanwhile, leaders from around the world will be encouraged to connect in the Discovery Centre, where it is hoped investors will discover opportunities in the kingdom’s giga-projects such as Qiddiya, Diriyah Gate and King Salman Park.

Expo 2020 Dubai will open in October, with more than 150 countries taking part after it was postponed by a year because of the coronavirus pandemic.